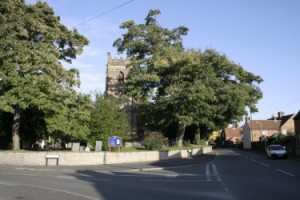 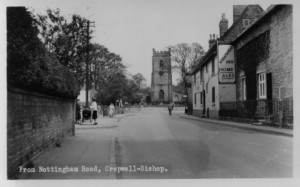 The village has a long history, part of its parish boundary being the Roman Fosse Way. Little however has been found dating from those times although there must have been some Roman activity in the parish. If you look at a map showing the Fosse, there are no villages on it between Leicester and Newark, except Stoke. It has been suggested that the Fosse was a highway for marauding bands in Saxon and Viking times and it was safer to have your settlement away from the road than on the road itself. The Cropwell part of the village name comes from Crophille, known now as Hoe Hill. The Bishop part derives from the fact that the Archbishop of York was Lord of the Manor from 956. Archbishop Thomas II granted the lands here to the Canons of Southwell in about 1110. These lands became known as “prebends” and the Canons responsible for them known as “prebendaries”. The Boutellier or Butler family were Lords of the Manor at Cropwell Butler and so that name stuck. This difference in village ownership has influenced the development of the two villages for as an open village, Cropwell Bishop became more developed than Cropwell Butler that was a closed village Although there was no Bishop of Southwell until 1884, the Canons of Southwell controlled the lands in Cropwell Bishop in the Middle Ages and they received tithes and rent from the people who farmed the land. The Canons established two manors in the village and these were known as Oxton Netherhall and Oxton Overhall. Unfortunately, little now remains of either of these two manors. Overhall was located opposite the old village school on The Fern and was finally pulled down in the 1950’s. Timber from this house was dated by dendrochronology to the 1300’s. Netherhall was to be found behind the Co-Op in the area now occupied by Rawlings Court and parts of the ruins still existed in the 1920 -30’s. 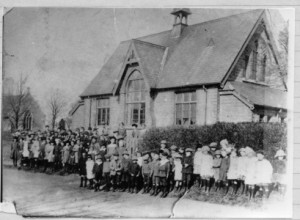 The chancel of St Giles church was built around 1215 by the Chapter of St Mary’s at Southwell and the church was gradually extended with the tower being the last to be built in the early 15th century. The Oxton Prebendaries were responsible for the upkeep of the chancel but passed that responsibility to the tenants of their two farms at Netherhall and Overhall. The parishioners were responsible for the rest of the church that was in fact used for all sorts of secular purposes as well as services. Some early 15h century “poppy head” pews still survive in the church. Methodism began in Cropwell Bishop at the end of the 18th century and the early services were held in people’s houses. As the congregation grew, more room was needed and the present Chapel was opened on the 16th September 1842. The Chapel is now a listed building and one of very few in the Vale of Belvoir to retain most of its original features. A National School was built in the churchyard in 1850 for £90 and is now known as the Parish Room opposite the Post Office. Attendance was generally restricted to Anglican children and as a result, numbers fell and it was closed when a new Board School, open to all children, was opened in 1878 adjacent to the Church on Fern Road. This school continued in use until the current school was built in 1961. The first Post Office, in the last half of the 1800’s, was run from a thatched cottage that was demolished when Ebenezer House, next to the current Post Office, was built in the early 1900’s. The Post Office then moved to the house that looks straight down Church Street and was latterly kept by Mr Walker until 1973 when it moved to its present position. Water has always been a vital part of life and the old Cropwell Bishop villagers used to fetch water in buckets from Spring Hill some 350m behind the Co – Op. Part of the brickwork to this spring (originally know as “Cock-butt Spring”) was still there in the 1970’s. Water for the cattle and indeed for some of the villagers, came from the Grantham Canal built in 1793-5. 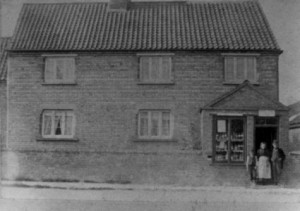 A brick works was located alongside the canal between the Nottingham and Kinoulton Roads and many of the houses in West Bridgford are built of Cropwell Bishop bricks, carried there by barges on the canal. An earlier brickworks was located behind Rose Villa on Cropwell Butler Road. The quarrying of gypsum played an important part in the life of Cropwell Bishop in the first half of the 20th century. There were two main firms mining gypsum, the Gotham Company and Messrs Heaselden. They employed many men and there were a number of fatalities, unsurprising considering the conditions that men were allowed to work in then. The gypsum was of a very high quality and was used in the manufacture of medicines. Mill Lane received its name from the steam mill that once stood there and was used to grind corn. Photographs still exist of the mill that came to a sudden end in 1910 when the steam engine blew up. Previously, corn had been ground in a windmill situated at the top of Fern Hill on the south side. It is first mentioned in 1686. It blew down in a gale in 1849 but was back at work by 1851. Nothing now remains of the building. The oldest of the public houses in the village is The Wheatsheaf, the building dating from the 1600’s. The two other pubs, The Chequers and The Lime Kiln, still exist, but The Canal Inn and The Plough and Harrow, have long gone. The latter, known as The Plough, was situated on Stockwell Lane and is now the house with the flat roof, the original roof having been destroyed in a fire. This pub used to function as a beer and wine retailer as well as a pub. 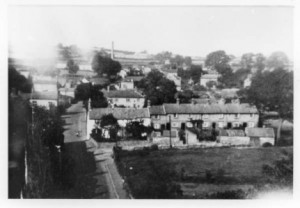 The old village was centred around the church on Church Street, The Fern and Nottingham Road and the population grew from 300 in 1800 to 650 in 1850 as more employment on the land and in small manufacturing businesses became available. Thereafter the population remained fairly constant at around 600 from 1850 until 1950 when local authority housing was built at the northern end of Hoe View Road. The population again grew at the beginning of the 1970’s when a road was put in to link the west end of the existing Hoe View Road with Nottingham Road. The developers J T Bell and Wimpey then built houses that doubled the village population and brought it up to the current level of almost 2000. The Memorial Hall was built by contractors W. Burnett & Sons of Hickling with the help of local inhabitants as a tribute to the men who fought in the First World War and was opened in 1929 by Mrs. J.N. Derbyshire, The Prince of Wales visited in June 1932 as part of his Social Services Tour in the County. The hall continues to be used for village functions. This resumé of Cropwell Bishop can only really be a list of items that may give some answers to the buildings one can see around Cropwell Bishop. The Cropwell Bishop Heritage Group are collecting photographs and memories of the village in bygone times and plan to renovate the Church Room and turn it into a Heritage Centre where much more information about the past of the village can be found. DHS November 2007

We use cookies on our website to give you the most relevant experience by remembering your preferences and repeat visits. By clicking “Accept All”, you consent to the use of ALL the cookies. However, you may visit "Cookie Settings" to provide a controlled consent.
Cookie SettingsAccept All
Manage consent

This website uses cookies to improve your experience while you navigate through the website. Out of these, the cookies that are categorized as necessary are stored on your browser as they are essential for the working of basic functionalities of the website. We also use third-party cookies that help us analyze and understand how you use this website. These cookies will be stored in your browser only with your consent. You also have the option to opt-out of these cookies. But opting out of some of these cookies may affect your browsing experience.
Necessary Always Enabled
Necessary cookies are absolutely essential for the website to function properly. These cookies ensure basic functionalities and security features of the website, anonymously.
Functional
Functional cookies help to perform certain functionalities like sharing the content of the website on social media platforms, collect feedbacks, and other third-party features.
Performance
Performance cookies are used to understand and analyze the key performance indexes of the website which helps in delivering a better user experience for the visitors.
Analytics
Analytical cookies are used to understand how visitors interact with the website. These cookies help provide information on metrics the number of visitors, bounce rate, traffic source, etc.
Advertisement
Advertisement cookies are used to provide visitors with relevant ads and marketing campaigns. These cookies track visitors across websites and collect information to provide customized ads.
Others
Other uncategorized cookies are those that are being analyzed and have not been classified into a category as yet.
SAVE & ACCEPT